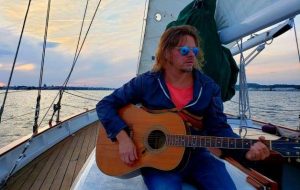 A saxophonist, a guitarist, a singer/songwriter, and a bandleader, Ken has been described as a purveyor of restless midwestern sentimentality, who searches in his songs for the kinds of truth that’s often best found within oneself. Whether performing as a solo acoustic singer-songwriter or with his full band Cross Kentucky, Ken stays busy, playing 200+ shows a year across the DC, Delaware, Maryland, and Virginia region, the eastern seaboard, the midwest, and south.

With the 2014 release of “…Beneath Potomac Skies” – a 12-song, full-band collection of moments and memories culled from time spent in Washington DC, and many other locales – Ken Francis Wenzel introduced his own roots-rock, country jazz-tinged take on love, learning, and life in contemporary America. Featuring several guest appearances from some of the DC area’s finest musicians, “…Beneath Potomac Skies” is the long-awaited follow-up to Ken’s 2010 debut acoustic EP, “…This is Cross Kentucky”. With a raw voice, lyrical saxophone, and honest, straightforward songwriting, both records showcase the perspective and passions of a well traveled, yet still searching singer/songwriter – one with a somewhat different story and background than most. 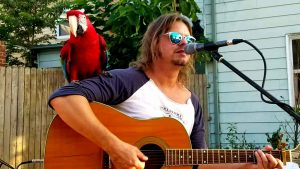 d raised in Champaign, Illinois, Ken studied classical saxophone at the University of Illinois before graduating from UNLV in Las Vegas, NV with a degree in jazz studies. He spent the next decade playing all over the world: in Las Vegas casinos; on cruise ships in Northern Europe, Africa, and Asia; at Universal Studios in Osaka, Japan; on national tours of Broadway musicals; at festivals including the 2004 Montreux Jazz Festival and 2010 Chicago Blues Festival; and of course, in countless clubs and small venues. He continually works as an in-demand freelancer, playing saxophone with artists both locally and nationally – including, among many others, Frankie Avalon, Ben Vereen, Bobby Parker, Noel Gallagher & High Flying Birds, and Carlos Santana.

Beth is a natural born sales person. Her attention to detail serves her well in organizing private cruises and group events aboard Woodwind. Though she has not always been a sailor by nature, after several years sailing aboard the Schooner Woodwind she enjoys sitting back and enjoying a relaxing sail while Woodwind's crew takes care of everything else.
View all posts by Beth, Sales Manager →
Sunset Sail with Ken Wenzel
Sunset Sail with Eastport Oyster Boys
Schooner Woodwind  •  at the Annapolis Waterfront Hotel  •  80 Compromise Street  •  Annapolis, MD 21401  •  410-263-7837