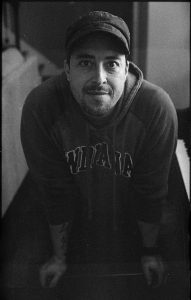 An Intimate, All Ages Acoustic Show with ERNIE HALTER aboard the Schooner Woodwind for a concert on a beautiful sailing boat, including a light delicious brunch. Ernie Halter will play acoustically while at anchor in a secluded cove. He will play for over an hour and after the performance we will set sail on the 74-foot, classic wooden schooner, Woodwind.

Raise the sails, steer the boat, sit back, relax and meet Ernie while sailing the Bay. 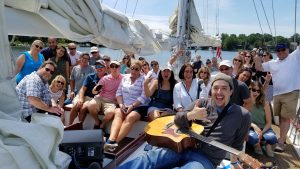 What’s a typical day in the life of Nashville singer/songwriter Ernie Halter? Turns out there’s no such thing. This do-it-yourself, grass-roots, superfan-building machine of a musician has toured all 50 states, Europe, and Asia. His acoustic/vocal centered songs have been featured in film and television. His YouTube and social media plays outnumber those of many major artists, and his multiple crowdfunding projects have raised a combined $50,000. He’s had more than 30 million streams on Spotify. Keys to building a thriving and self-sustaining career have included staying one step ahead of the game and maintaining a strong, personal connection to his fans.

Halter grew up just south of Los Angeles. He fell early and hard for the Beatles and Stevie Wonder, and taught himself to play piano and guitar. While attending a Berklee In L.A. summer program at Claremont McKenna College, Halter felt a kinship with the other musicians and knew he’d found his niche.

An early adopter of Youtube, Ernie posts original songs and covers, and has inspired more than 40,000 covers by other YouTube users.

One early fan stood out from the rest. A very young Justin Bieber began watching Halter’s videos religiously and attended one of his shows in Los Angeles. Bieber later performed Halter’s song, “Come Home to Me” at a show in Hong Kong and released a cover version online. “That song certainly introduced me to a whole lot of younger fans that wouldn’t have heard of me otherwise,” Halter says.
What’s the most rewarding part of Halter’s career? “When someone tells me that my music has been the soundtrack to their relationship or that a song got them through a very hard time in their life—that’s the most rewarding part.” For Halter, it’s all in a day’s work.

Ernie lives in Mount Juliet, TN with his wife Kristen and their twin 6 year old daughters, Lucy and Layla.

Enjoy a light brunch as we cruise to a secluded cove. Mimosas and Bloody Marys will be available at our cash bar filled with local craft beer and wine.

A maximum of 35 guests will be able to enjoy this really special event! We do sail rain or shine. If the musicians cannot play due to the weather, but we can still sail- we will refund the performance part of the ticket.  There are no assigned seats. There are no refunds or exchanges unless the captain cancels the cruise due to unsafe conditions.

Departs from the Annapolis Waterfront Hotel.

Acoustic Brunch Cruise Menu:
Bacon & Swiss Quiche Pinwheel
Spinach & Pesto Quiche Pinwheel
Seasonal Fruit Salad
Pumpkin Bread
Have any old instruments you want to go to a good home?  We have partnered with Music 4 More, a 501(c)3 charity organization that launched in Baltimore in 2007 (now based in Annapolis, MD), and we will have a drop off that day for any instruments you would like to donate! Their primary focus is collecting instrument donations, repairing and reintroducing them into struggling schools and music therapy programs for veterans. Since their launch, Music 4 More has donated over 700 instruments to schools and VA hospitals in 13 states. 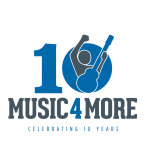 Music 4 More accepts instruments in any shape (Currently we are not taking donations of pianos/organs or sheet music). Any instruments that are deemed unrepairable will be used for art projects to sell/auction for fundraising activities.

Beth is a natural born sales person. Her attention to detail serves her well in organizing private cruises and group events aboard Woodwind. Though she has not always been a sailor by nature, after several years sailing aboard the Schooner Woodwind she enjoys sitting back and enjoying a relaxing sail while Woodwind's crew takes care of everything else.
View all posts by Beth, Sales Manager →
Classic Wooden Boat Regatta
Cocktail Cruising
Schooner Woodwind  •  at the Annapolis Waterfront Hotel  •  80 Compromise Street  •  Annapolis, MD 21401  •  410-263-7837