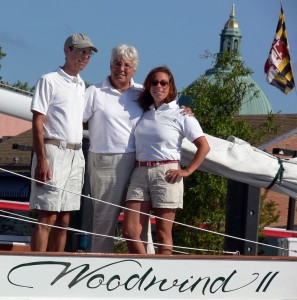 Schooner Woodwind is a family business

The owners of Woodwind, Captain Ken and Ellen Kaye, were public school teachers, who decided to retire while still young (after teaching for 25 years).

They dreamed of someday owning a schooner to introduce people to sailing. After their daughter, Jennifer, returned from a semester at sea aboard a 125′ schooner, the family pursued their dream in earnest. They had their handsome vessel custom designed and built based on their knowledge gained from more than 20 years of sailing. They fell in love with Annapolis and moved here after spending all their lives in Connecticut.

Jennifer became a Captain in 1996 and joined them full time. A second, identical “Woodwind“- named “Woodwind II” was the latest addition to the family in 1998.

The extended “family” of crew members are chosen for their sailing knowledge, friendliness and enthusiasm. These are the qualities that make your on board experience a special one. 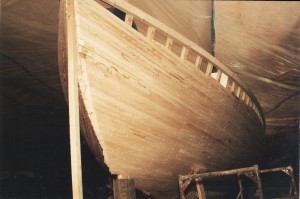 Schooner Woodwind was contracted to be designed by John Scarano for Ken and Ellen Kaye, from Wallingford, CT. The schooner was specifically designed to provide a fun sailing experience for guests.

The schooner was finished at the Scarano Boat Builder’s Yard in Albany, NY. Her hull was made of Port Orford Cedar ribs and then strip planked with the same material, her decks Douglas Fir, and a thin sheathing of fiberglass on the outside of the hull. 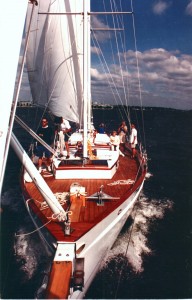 The first sail for the Schooner Woodwind in Annapolis.

Woodwind’s first voyage! She was sailed down the Hudson River, up the Delaware Bay, through the C & D Canal, and down the Chesapeake Bay to Annapolis.

The U.S. Coast Guard gave Woodwind the Certification of Inspection for 49 passengers, and our kick off sail was on July 3. Schooner Woodwind was now sailing the Bay four times a day with as many as 48 passengers. The dream became a reality. 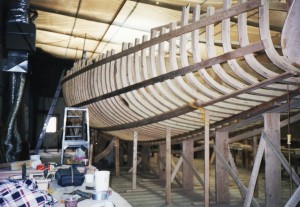 Late 1997, the building of Woodwind II

“Woodwind II” was completed and sailed down to Annapolis the same way Woodwind was delivered. After three short weeks, we were up and running with both schooners. 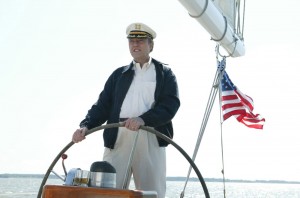 Christopher Walken at the helm of Schooner Woodwind II

“Woodwind II” was selected to be the sailing yacht of Christopher Walken’s character in the movie, “The Wedding Crashers”. The filming took place in Oxford, Cambridge, St. Michaels and on the Choptank and Miles Rivers. New Line Cinemas booked the boat for 9 days to film the scenes for the movie starring Vince Vaughn, Owen Wilson, Rachel McAdams, Jane Seymour, and Christopher Walken. The name of the boat was kept the same for the movie.

“Wedding Crashers” hit the movie theaters, grossing over $200 million dollars. Everyone wanted to sail on the Woodwind that was in the movie and see all the photos of the filming process. (The photo albums are still aboard showing the filming of the movie.) The boat looked gorgeous and was in the movie for about two minutes, under full sail! What a thrill!